This very rural area is more dependent on farming than any other part of the AONB.  Some strong networks have been established, and these are important for managing change in farming to provide the best outcomes for both the landscape and the community.  The River Clun catchment is a focus for conservation activity, and people enjoy the heritage and tranquillity of the area.

The Clun area is the most deeply rural part of the AONB and is amongst the most sparsely populated parts of England.  Bounded to the west by the Welsh border, the area comprises the catchment of the River Clun and part of that of the River Teme extending from the uplands of the Clun Forest to the lower Clun Valley.  Shales and siltstones create a rolling topography, with enclosed and cultivated fields right up to the hilltops, except where remnant and restored heathland remain, such as at Rhos Fiddle and Mason’s Bank. 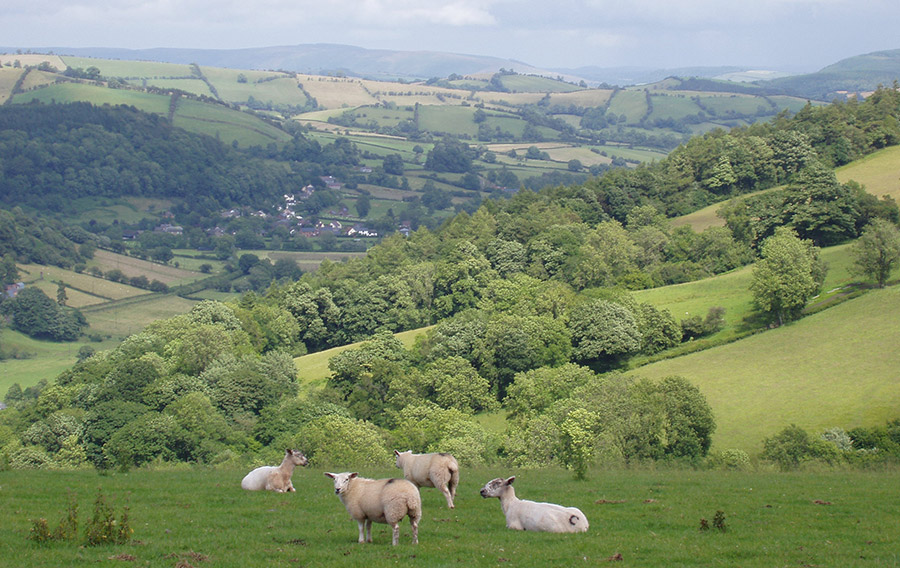 There are a number of large, mainly coniferous Forestry Commission woods in the lower Clun valley, some of which support the nationally rare Wood White butterfly.  Smaller conifer woods higher up are valued for shelter.  Broadleaved woodlands are less common and tend to be small and on steeper slopes and gullies.

Just outside the AONB, the River Clun holds a European level protected site (SAC) for a population of the rare freshwater pearl mussel which is in serious decline.  The river and its tributaries are largely tree-lined, but alder disease, stock access to riverbanks and factors affecting water quality, such as nutrients and siltation, are contributing to poor condition of the river for the pearl mussel and other wildlife.  Much project work over a period of years targeted at these factors has made some progress, but the issue is becoming more critical.

Offa’s Dyke runs north - south across the area, in some of its best preserved and dramatic sections.   It connects the Shropshire Hills with other areas along the border including Herefordshire and Radnor and the Clwydian Range.

Other archaeological earthworks include Bury Ditches hillfort, and the Upper and Lower Shortditches near the Kerry Ridgeway.  The small town of Clun is a natural centre for the area, and its prominent ruined castle shows that this has long been the case.  The market towns of Bishop’s Castle and Knighton lie just outside the AONB to the north and south, with Craven Arms to the east. 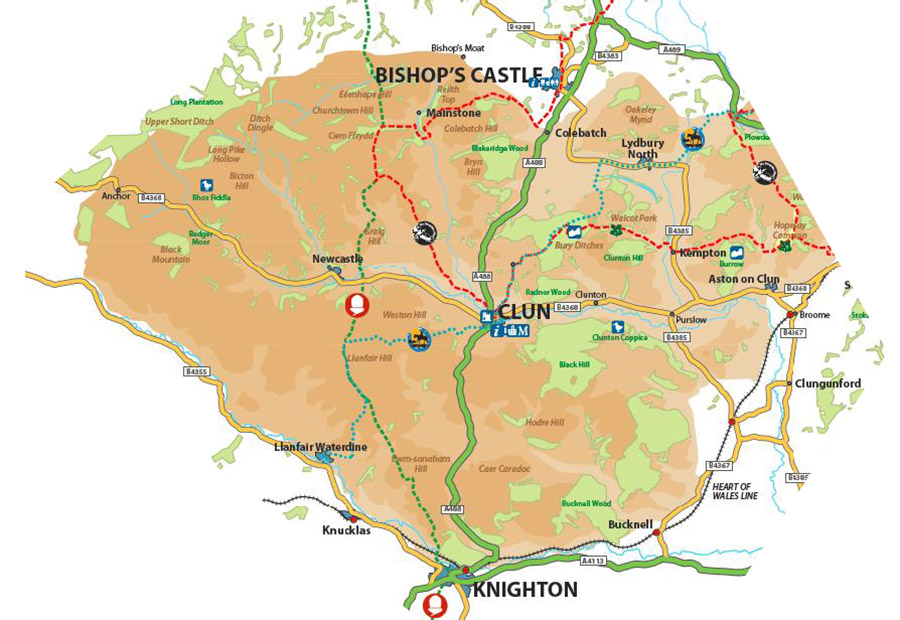 The pattern of landholding is more of medium-sized family farms, with fewer large estates and less smallholding than elsewhere.  Livestock rearing dominates, but as the soil is relatively good, potatoes and other crops are cultivated even high up.  Tourism and recreation are generally at a much lower level than elsewhere in the AONB, although Clun, Bury Ditches and Offa’s Dyke Path National Trail are popular with visitors, and promoted walks are helping to develop the area’s potential for sustainable tourism.

Changes in farming will probably have the greatest influence on this area’s future.  A high age profile, rising costs and the difficulty of making livestock products pay in a competitive global market are felt as keenly here as anywhere, sometimes compounded by the relative isolation of the area.  Uptake of former agri-environment schemes was very high, and the transition to new schemes will be significant for both the landscape and farm incomes.

The AONB Partnership has given close support over some years to the Land, Life & Livelihoods group which aims to bring farmers and the rest of the community together and help to secure a sustainable future for the upper Clun Forest part of the area.  The group has held many events and practical steps such as advice workshops for farmers.  The Upper Clun Community Wildlife Group is also active in monitoring important species, and in encouraging land-owners and managers to maintain and improve habitats for them.

The AONB Partnership has been very active in the Clun Catchment for many years, working with farmers on riparian habitat management, community involvement and an integrated catchment approach.  The Clun Catchment Partnership helps to improve co-ordination and raise the profile of the issues with organisations, landowning and community representatives.

Large scale poultry farming has been expanding and is now found further up in the catchment, with concerns about landscape impacts and cumulative nutrient input. 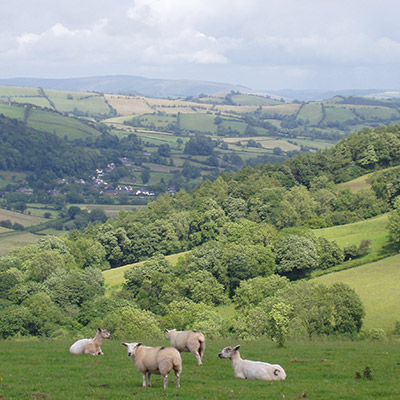