During the Covid 19 outbreak, please follow the latest Government Guidance to

Here's a list of hills we think are interesting and satisfying to go up. It is reasonably comprehensive, but doesn’t include everything in the AONB that might be called a hill or every high point on extensive hills such as the Long Mynd.

The tops of the hills listed (or in some cases a point quite near it) are accessible by public rights of way or on defined open access land. Please observe rights of public access. A few fine looking hills which do not have public access have been excluded – those you will have to enjoy the view of rather than the view from!

This isn’t a tick list or a challenge, but intended to be an appreciation of the wonderful variety and beauty of the Shropshire Hills, and an invitation to explore. From fantastic viewpoints to ancient hillforts, geological features and wildlife refuges, you will find all these and more among this selection. 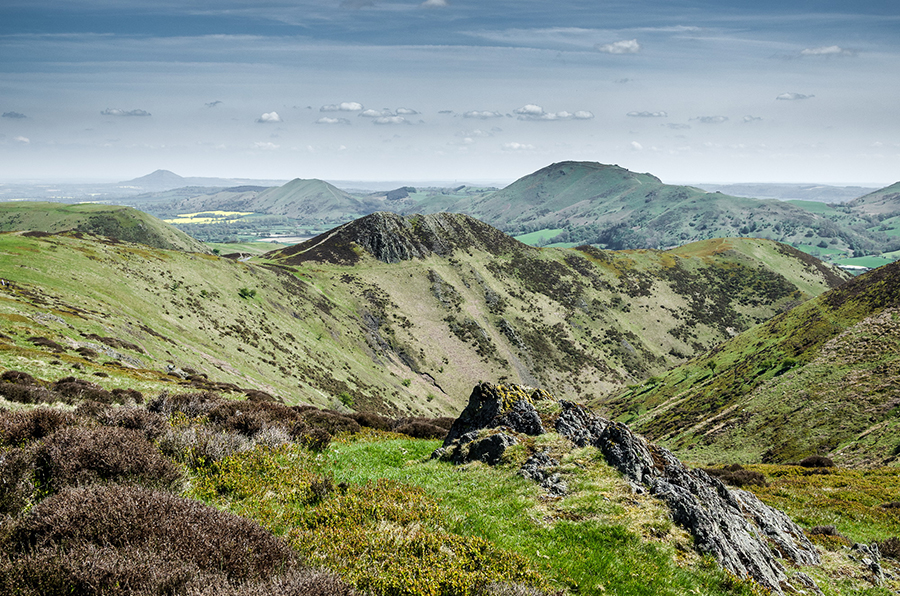 Grid references are given below. Please refer to maps and other sources for routes and access information, some links are included.

Brown Clee – Abdon Burf 540m, SO593867. The highest point in Shropshire. To the east you don’t reach any higher ground until the Ural mountains in central Russia.

The Stiperstones 536m, SO367986. The highest point is Manstone Rock. Be sure also to see the Devil’s Chair (whose crest provides an entertaining short scramble for those with a steady head), and the various other rocky tors of sandstone quartzite. A National Nature Reserve owned and managed by Natural England.

Titterstone Clee 533m, SO591779. Despite a large quarry, various masts and a radar station, this is still a fine hill, and located in the south-east of the area, offers different views including to the Malvern Hills and the Cotswolds, our neighbour AONBs.

Long Mynd – Pole Bank 516m, SO415944. Rising gently above the Long Mynd plateau, Pole Bank is nevertheless a pleasing top, served by good paths and an interesting toposcope. The Long Mynd is owned and managed by the National Trust.

Clee Burf (Brown Clee) 510m, SO593842. Slightly lower sister to Abdon Burf, this hill lies just to the south, above an extensive area of common land.

Hoar Edge (Titterstone Clee) 478m, SO597769.  An outlier of Titterstone Clee close to the large Cleehill Quarry, with some interesting prehistoric cairns on its flat topped ridge.

Yearlet where it is cut by deep valleys (known locally as batches). Yearlet is one of the most impressive.

Caer Caradoc 459m, SO477953. Rising above Church Stretton, Caradoc is undoubtedly one of the most beautiful of Shropshire’s Hills, its craggy ridge suggesting a hill of much greater stature. An impressive Iron Age hillfort crowns the top.

Knolls (Long Mynd) 457m, SO403902.  The southern part of the Long Mynd is well worth exploring.  The narrow ridge of the Port Way rises to this trig point on the plateau.

Heath Mynd 452m, SO335940. A rounded heathery hill south of the Stiperstones, with a satisfying top.

Nipstone Rock 445m, SO355968. Stiperstones in miniature! Managed by the Shropshire Wildlife Trust, this lovely little crag forming a southern extension of the Stiperstones ridge is a very short walk from the road. Heathland is being restored after removal of conifer plantations.

Stow Hill 434m, SO317745. Good views into Herefordshire from this hill on the southern edge of the AONB.

Llanfair Hill 431m, SO254794. A high point on Offa’s Dyke Path National Trail, with some of the best preserved sections of the Dyke.

Hope Bowdler Hill 426m, SO479940. With a few different tops, this is one of the Stretton Hills and offers great walking.

Rhos Fiddle 420m, SO206854. Not a very defined hill top, but close to another of the Clun Forest’s subtle high points, and a fantastic site – the largest area of heathland remaining in the Clun area, managed by Shropshire Wildlife Trust.

Sowdley Wood 417m, SO324799. Wooded hilltop above the Clun valley.  Part of the slightly higher Black Hill marked on maps, but much better views.

Betchcott Hill 413m, SO422982.  The north-west end of the Portway is where the Long Mynd grades gently into improved pastures.  The track runs close to the trig point here, with good views over the lowlands to the north.

Callow 412m, SO431919. Another of the fine hilltops on the east side of the Long Mynd. Stroll onto the summit from the plateau, or climb it the hard way from the bottom!

Norbury Hill 411m, SO358943. The high points of either Norbury Hill or Linley Hill are not really the focus here, but rather the amazing avenue of Linley Beeches climbing the ridge. New trees were planted in the early 2000s, as the original ones are reaching the end of their life.

The Wrekin 407m, SJ627081. Standing proud above low-lying land near Wellington and Telford, the Wrekin is our best known hill and an iconic landmark for miles around.

Stapeley Hill 403m, SO313991. An interesting area of common near the Welsh border, Stapeley offers good walks and views, as well as the fascinating Mitchell’s Fold stone circle.

Willstone Hill 403m, SO484943. One of the tops of Hope Bowdler Hill, blessed with its own name, and the impressive Battle Stones.

Burway Hill 402m, SO440943.  Rocky ridge above Carding Mill Valley on the Long Mynd.  Looks small from above, but a lovely climb up to the east side from down in Church Stretton.  (Note that a former car park off the Burway Road right beside the hill has been closed to help reduce erosion on the short west side of the hill.)

Black Rhadley 402m, SO342955.  A southern outlier of the Stiperstones ridge, this rounded summit has valuable SSSI heathland.

Cefn Gunthly 400m, SO331948.  A grassy ridge next to Heath Mynd, south of the Stiperstones ridge.

Caer Caradoc 399m, SO309757. A second with the same name – this one being a smaller hill above Chapel Lawn in the Redlake valley, but equally with an important prehistoric hillfort.

Gatten Hill 399m, SO388985.  One of the rolling grassy hills between the Long Mynd and the Stiperstones.  The public footpath goes quite close to the highest point.

Ragleth 398m, SO454921. The impressive ridge opposite Little Stretton, Ragleth offers great views, and has some nice woodland on its lower flanks.

Bury Ditches/Sunnyhill 393m, SO327838. Bury Ditches is one of the largest and most impressive hillforts in Shropshire and rises above surrounding Forestry Commission woodland.

Bromlow Callow 384m, SJ326008. The clump of pines on this prominent small hill above the Rea Valley make it recognisable from miles around. Conservation work is going on to control the spread of gorse.

The Lawley 377m, SO494974. Visible and easily reachable from the A49 between Shrewsbury and Church Stretton, the Lawley offers a lovely gentle grassy ridge walk to a satisfying summit.

Mucklewick Hill 373m, SO330970. Lying not very obviously in the interesting terrain west of the Stiperstones, Mucklewick is worth the walk in.

Cefns 370m, SO274843. A nice ridge on the Shropshire Way north of Whitcott Keysett in the Clun Valley.

Rorrington Hill and together forming an interesting area to explore.

Helmeth Hill 344m, SO469938. This accessible small wooded hill near Church Stretton is owned by the Woodland Trust and has waymarked paths.

Callow Hill 336m, SO460850. East of the Wenlock Edge escarpment lies the higher ridge of the Aymestry limestone, which is broken by valleys into a series of low hills. Callow Hill is perhaps the most accessible and satisfying of these, not least because of the impressive tower of Flounder’s Folly, restored by a Trust in the early 2000s and now open on arranged days.

Kinsley Wood 330m, SO287730. Forestry Commission wooded hill right above Knighton.  More satisfying if climbed right along the ridge from the eastern end.

Earl’s Hill 319m, SJ409048. With its nearby wooded lower shoulder Pontesford Hill, Earl’s Hill is a nature reserve managed by Shropshire Wildlife Trust. The volcanic rocks form steep crags and scree in places, and the reserve has valuable woodlands and acid grassland.

Hopesay Hill 310m, SO402838. A lovely little piece of common with sheep and ponies. Great views and an easy level walk if you park at the north side.

Nover’s Hill 305m, SO453952.  Separated from the Long Mynd by Cwmdale and the Batch Valley, this small hill above All Stretton has a nice north ridge and a flat top with a pond and ancient enclosure.

Norton Camp 294m, SO371797. A huge hillfort tucked in the woods above Craven Arms, this can be reached on public footpaths.

Roman Bank, Wenlock Edge 285m, SO512905.  Wenlock Edge is a classic limestone escarpment, and at nearly 20 miles in extent, is one of the longest continuous woodlands in England. Views are enigmatic, and high points indistinct, but the Edge is a lovely place to explore.  This is the highest point on the Edge, though this isn’t obvious when you are there!

Stanway Coppice 270m, SO548928.  A high point on the dissected limestone ridge behind Wenlock Edge, Stanway has a nice scarp woodland and is easily reached from the National Trust’s Wilderhope Manor below.

Clunbury Hill (North top) 270m, SO378804. The bridleway goes to the lower north top of Clunbury Hill, which offers lovely views over the lower Clun valley. (poems inspired by this hill http://www.clunburyhill.com/)

The Ercall 265m, SJ644097. Smaller sister just to the north of the Wrekin, the Ercall has lovely woods and an impressive former quarry with important geological exposures where some of the earliest rocks containing fossils lie ‘uncomformably’ on an eroded earlier surface of Precambrian volcanic rocks. Managed by Shropshire Wildlife Trust.

Halford Hill 240m, SO447836.  With a steep woodland and a grassy hilltop with great views, Halford Hill is a pleasant short walk from Craven Arms.

And just over the border..

Corndon   513m,  Prominent in views from the Stiperstones, the shapely peak of Corndon rises from the very border, and is in a corner of Wales almost encircled by Shropshire.  It was the site of a Stone Age axe factory due to the particular properties of the ‘picrite’ basalt rock found there.  Lower neighbours Llan Fawr (426m) and Roundton (370m) are also well worth visiting.