The valuable habitats of the AONB, especially heathland, grassland, woodland and rivers are linked to a long history of relatively sympathetic land management.  The Shropshire Hills have an unusual mix of both upland and lowland wildlife, such as red grouse and dormouse.

It's an important area for upland species such as merlin, snipe, whinchat, dipper, emperor moth, small pearl-bordered fritillary and grayling butterflies and holds some nationally threatened species such as curlew and wood white butterfly.  It is also significant for species of western oakwoods such as pied flycatcher, wood warbler, redstart and tree pipit, and a stronghold for formerly more widespread species like skylark, black poplar and great-crested newt.

Scroll down for links to help you explore... 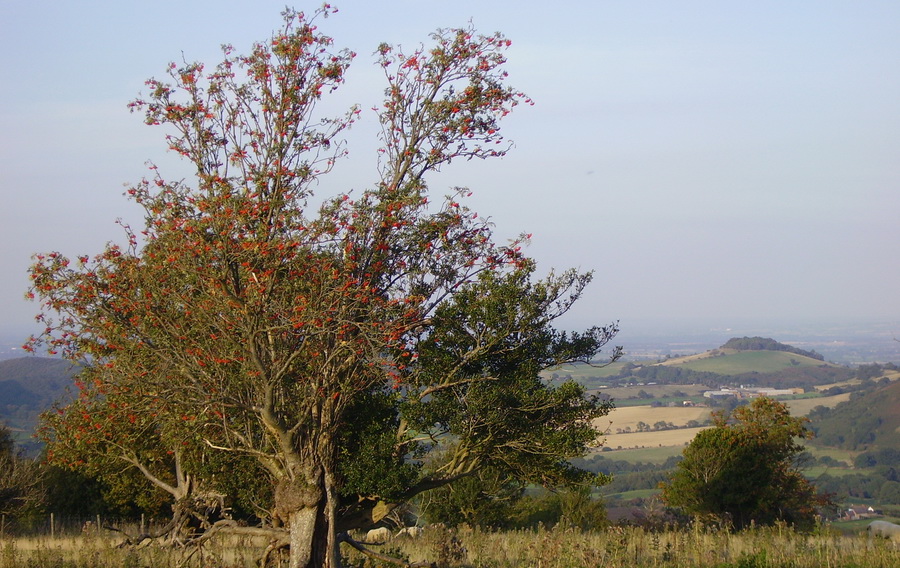 Carding Mill Valley and the Long Mynd - much of the Long Mynd is owned and managed by National Trust.  It's a large plateau of heathland supporting plants including heather and bilberry (known locally as whinberry), along with green hairstreak butterfly and hunting merlins. Pools and wet flushes add variety, along with the deep valleys with rock outcrops, hawthorn, gorse and short turf acid grassland. The hill top is crossed by the ancient Portway, and the Mynd is rich in archaeology including Bodbury Ring hillfort and Bronze and Iron Age monuments.

Wenlock Edge a wooded limestone escarpment is famous for its dramatic views, fossils and rare flowers. The National Trust’s guide to Wenlock Edge includes information on the wildlife, the limekilns and quarries and is available from information centres at Much Wenlock and Cardingmill Valley. The Edge can be reached from National Trust car parks near Much Wenlock and at Presthope, Shropshire Wildlife Trust’s Harton Hollow reserve.

Managed by Natural England, this is a relatively wild, high ridge of heathland with rocky tors and scree, red grouse, ravens and stonechat.  Come late summer the reserve is a sea of purple and not to be missed.  Along with the heather a variety of other plants flourish here including bilberry (known locally as whinberry), and this in turn attracts many insects and birds – look out for a green hairstreak butterfly or stonechat on the gorse.

The main car park is at the south end, where there is a 650m well surfaced All-Ability Trail. There are also many other points around the hill where access can be gained, including through the deep batches (valleys) from Stiperstones village or Snailbeach, and from The Bog Visitor Centre.

Adjacent to the Stiperstones NNR are three Shropshire Wildlife Trust nature reserves – the ancient woodlands and boggy pastures of Brook Vessons, the remarkable parkland of ancient holly and rowan trees at the Hollies and the outcrop and restored heathland of Nipstone.