As our name suggests, we're a landscape of hills (and valleys).  With over 50 hilltops, there's plenty to explore.  Some of our hills are fine summits and well known, others more subtle and seldom trodden.

Listed here are our easier to access hilltops.  Click on the button below for information on all of the hills.

The Stiperstones - This a relatively wild, high ridge of heathland with rocky tors and scree, red grouse, ravens and stonechat. Much of the Stiperstones is a National Nature Reserve. The main car park is at the south end, where there is a 650m well surfaced All-Ability Trail. There are also many other points around the hill where access can be gained, including through the deep batches (valleys) from Stiperstones village or Snailbeach.

The Bog Visitor Centre has local information and a café.

The restored miners’ cottages at Blakemoorgate

High on the hilltop, the cottages provide a fascinating insight into life in days gone by (information panels outside, cottages open for events run by Natural England).

Adjacent to the Stiperstones are three Shropshire Wildlife Trust nature reserves – the ancient woodlands and boggy pastures of Brook Vessons, the remarkable parkland of ancient holly and rowan trees at the Hollies and the outcrop and restored heathland of Nipstone Rock.

The  is a large plateau of heathland supporting plants including heather and bilberry (known locally as whinberry), along with green hairstreak butterfly and hunting merlins. Pools and wet flushes add variety, along with the deep valleys with rock outcrops, hawthorn, gorse and short turf acid grassland. The hill top is crossed by the ancient Portway, and the Mynd is rich in archaeology including Bodbury Ring hillfort and Bronze and Iron Age monuments.

Carding Mill Valley near Church Stretton is a popular place from which to explore the Long Mynd, or to visit in its own right, for picnics by the stream and short walks in stunning scenery. The National Trust tearooms, gift shop and education centre are also based here, along with an information hut and toilets.

Wenlock Edge, a wooded limestone escarpment is famous for its dramatic views, fossils and rare flowers.  The National Trust’s guide to Wenlock Edge includes information on the wildlife, the limekilns and quarries and is available from information centres at Much Wenlock and Cardingmill Valley. The Edge can be reached from National Trust car parks near Much Wenlock and at Presthope, Shropshire Wildlife Trust’s Harton Hollow reserve.

The Wrekin is Shropshire’s iconic hill. Many people enjoy the steady climb through the lovely woods up the main path from Forest Glen to the open hilltop with spectacular views and the famous crag of the Needle’s Eye. The summit holds an impressive Iron Age hillfort, and there are many former charcoal burning platforms in the woods, linked to early industry at Ironbridge. Next to the Wrekin is the smaller hill of the Ercall, a Shropshire Wildlife Trust reserve with woodlands and dramatic geological exposures in the old quarry of the transition (an unconformity) between Precambrian and Cambrian rocks.

Offa’s Dyke, is one of the longest linear earthworks in Britain, built by King Offa of Mercia in the 8th Century. Running north to south roughly along the Welsh border, some of the best preserved sections of this important monument lie within the Shropshire Hills, providing the route for the Offa’s Dyke National Trail and other walks. The Offa’s Dyke Centre in Knighton provides an interactive exhibition along with other information and a shop.

Titterstone Clee is unique in being the only named hill to be shown on the 14th Century map of the world “The Mappa Mundi” preserved in the library of Hereford Cathedral. It is remarkably rich in geology, heritage and wildlife. As well as being a great viewpoint, the summit has the highest and largest hillfort in the county with associated Bronze Age earthworks. The landscape around tells the story of human occupation through ancient coal mining bell pits to large scale stone quarrying and one of the earliest hydro-power systems developed in 1885.
There is parking available at the head of the road from Cleehill village.
Adjoining the hill is Catherton Common, a recent Shropshire Wildlife Trust nature reserve with a wide variety of plants and animals.

Brown Clee has twin summits, Clee Burf and Abdon Burf, the latter being the highest point in Shropshire at 546 metres above sea level. Also important for its geology, the hill can be accessed through the Burwarton Estate woodlands near Cleobury North.

Bury Ditches between Clun and Bishop’s Castle is one of the best preserved multi-vallate hillforts in England, and managed by the Forestry Commission. 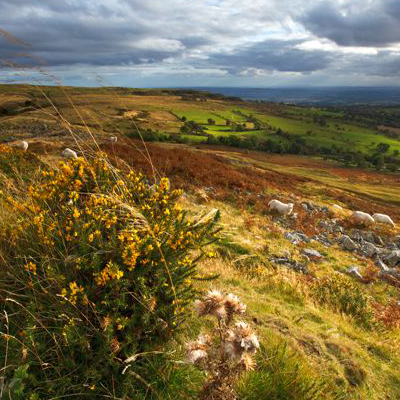 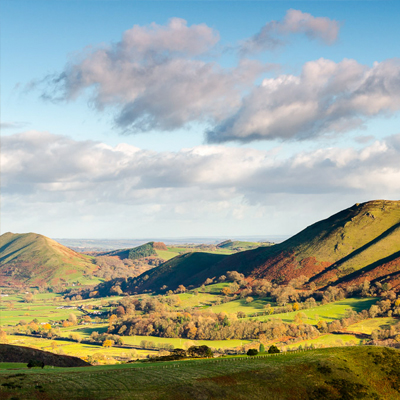