One Small Idea that grew into a Shropshire Wildflower Revolution – with the help of a Grant from the Shropshire Hills Area of Outstanding Natural Beauty Conservation Fund.

Janet Cobb is a retired nurse living in the tiny village of Edgton situated right at the heart of Shropshire Hills AONB.

In 2016 the verges were cut on May 31st by council contractors too early for the seeds to set for the following year.

By co-incidence another village, Myndtown, was also concerned about the disappearing flora in Shropshire Verges and from a meeting in a local pub Restoring Shropshire’s Verges Project was formed.

The Shropshire Hills AONB Trust fund projects through their Conservation Fund. The projects must either deliver practical conservation work or involve young people in activities relating to the conservation of the area. These awards are small sums that can act as seed funding for much bigger projects and give applicants the confidence that their project ideas are valued and worthy of investment.

In 2017 the Trust had awarded Myndtown, a tiny hamlet in the Shropshire Hills AONB, £1000 towards a project that aimed to engage local communities in the restoration and maintenance of wildflower rich roadside verges. They were also to share their ideas and contacts with other parishes in the area and so were perfect partners for Janet and Edgton Village

In 2018 Janet also applied for a grant from the Conservation Fund and received £1813 as a contribution towards her ambitious programme for the Edgton Verges Project. Local parish meetings were set up to explain the aims of the project and 26 volunteers recruited. Relationships with the Local Authority Highways Department were built and a deeper understanding of the complexities of relations between contractors, subcontractors and local contractors that had led to misunderstanding and early cutting were investigated. A major breakthrough was achieved that first year with the agreement of the local highways department to undertake a late (August) cut of the Edgton verges.

The Conservation Fund grant was used to pay for four surveys completed at different times over the summer by a professional botanist. The Surveys identified 53 existing species of interest in verges of Edgton and the group could now decide which verges needed restoration and what species would survive locally. The volunteers began the huge task of collecting photographic evidence of the existing flora and that of poor verges for the necessary ‘before’ and ‘after’ photos.

2019 continued with huge energy. Restoring Shropshire’s Verges Project was formally constituted by a strong coalition of partnerships in Shropshire including the Shropshire Hills AONB. Agreements on late cuts on identified verges were negotiated and a group of growers in Edgton grew on seeds for intentional planting of wildflower plant plugs. Janet began to give a series of talks to inspire other groups to set up further verge projects

And then came Covid and lockdowns and although the wildflowers continued to grow in the Edgton verges, life shut down and future plans were put on hold.

But certain commitments will go ahead in 2021 despite the restrictions. RSVP and Shropshire Highways have agreed to trial 10 kilometres of cut and collect clippings – leaving the clippings means they rot down and increase the fertility of the soil creating a hostile environment for the wildflowers to thrive.

So here is just one example of how a small idea can turn into a revolution – a rural one that impacts on climate change, on the potential for local tourism initiatives based on the abundance of wildflowers in the area and the taking back of control by local people who want to look after their local assets.

Just £1813 from the SHAONB Conservation Fund encouraged all this to happen and led to nearly £7000 worth of volunteer time. The group are now established with their own constitution and can apply for much larger grants if needed but their work shines a light on what can be done if you get brushed off by bureaucracy and decide to take action on things that matter to you and your community.

The Conservation Fund is made up with donations from Friends of Shropshire Hills AONB subscriptions, the Millichope Foundation, the Garfield Weston Foundation, the Martin Wills Wildlife Maintenance Trust and individual contributions.

Donate to the Conservation Fund 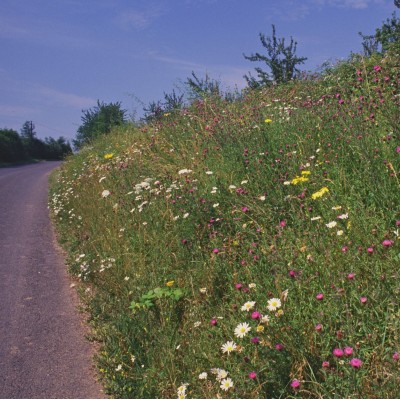 about the AONB Trust